A Meaningful Overseas Visit to Malawi

A Meaningful Overseas Visit to Malawi 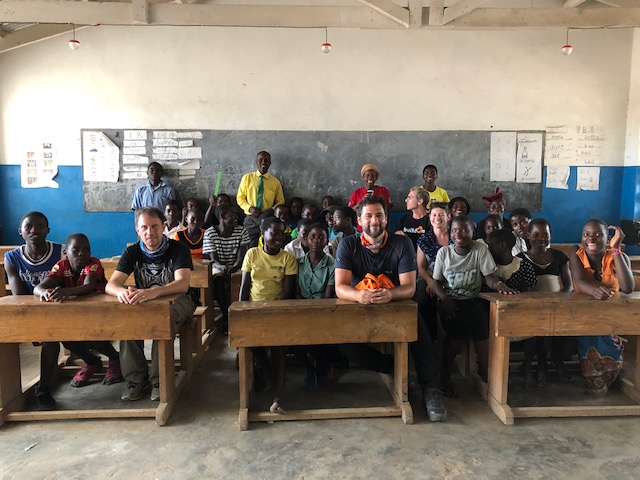 I have just come back from the most meaningful overseas visit in my life.

When the Knowledge E Foundation agreed to support a rural community in Malawi by donating funds for the construction of a primary school through the philanthropic organization Dubai Cares, I was excited to learn of the opportunity to go out there and join in the first few days of digging. My excitement grew as the departure date neared and having done all the doctor visits and had the vaccinations I spent a couple of Saturdays finalizing my packing list buying last minute items such as battery powered lamp and mosquito repellent.

During the pre-trek calls with the local partner company, Build-On it became clear that Internet access would be a challenge during our stay and I began to prepare for difficulties in attending online meetings while in Malawi. Armed with the knowledge that there is no electricity in the community however, I finally realised this week would require an entire re-focus and I am sure the airport security did a double take when I said I had no laptop to remove when screening my bag. Yes, I swapped the suit and wheely case for trek trousers and a rucksack and it felt great. I took a good book and relaxed on the Ethiopian airlines flight from Dubai first to Addis Ababa and then on to Lilongwe where I met up with my colleagues Kamran, Martin, Martin’s wife Agnes and Courtney, our Malawi based Build-On trek manager.

The rest of that day entailed driving up to a town called Kasungu in the Central part of the country and becoming acquainted with using a mosquito net and having our first acclimatisation and Chichewo language session with Courtney and Rustica – one of our translators. The KnE group then went out for a walk on the outskirts of the town and had our first taste of Kasungu struck by the prevalence of bicycles, the friendliness of the locals and the sights and smells of Eastern Africa in December.

The next day the trek continued two and a half hours on increasingly bumpy roads West towards our community, known as Kalanga and which covers 6 villages headed by Chief Leza. The mood in the minivan was high as we observed daily roadside life going on through the window and enjoyed some friendly banter with Courtney, Rustica, driver Aaron, cook Mathilde and our second translator, Johan. As the road had narrowed and we were tossed around in the van we were suddenly surprised when faced with hundreds young children running towards us waving branches thick with leaves and surrounded our van. Reassured this was our welcoming committee, we alighted and allowed ourselves to be swept into the village among the excited children almost learning their song by the time we arrived at the main mango tree where the whole community was assembled.

There followed a formal opening ceremony to our trek with introductions and speeches from community leaders, songs, jokes and recitals from school children, and some rather scary dances. Nominated by Kamran as company speaker, I told the community that we looked forward to learning about their community and working with them on the beginning of their school project. Privately I assumed we would be teaching and giving advice and soon found out that nothing could be further from the reality. Just in that first afternoon I began to see the level of commitment to the school by the sheer number of people present; children in front of us, their mothers (Azumai) on the right, fathers (Abambo) on the left and community leaders behind us. Following my speech, Kamran pointed out only half in jest that I had probably never held such an attentive audience as I did that day. We were then organized into pairs and allotted to our host families.

I shared with Kamran and our hosts were called Amai (housewife, also mother) and Abambo (man of the house, also father) and then I realised all the hosts were called the same. Our Abambo was fascinated by the Rubik’s Cube we brought and Amai showed us how to make Nsima – staple diet made from corn flour with Kamran becoming rather expert at it. Their house was fairly new and relatively spacious with a sizeable back garden with a bafa (bathing house), kitchen and beyond the fence was the Chimbudzi (outhouse). Each day after work, we would come home and head straight for the bafa and dinner was served by Amai at around 7pm with some chatting using a combination of English, Chichewo and sign language and bedtime was soon after as the darkness made it feel very late.

The next 3 days were great fun, we rose every morning at first light and joined the whole team for breakfast at one family smallholding designated the trek headquarters. Mathilde cooked eggs, baked beans, prepared fresh fruit and had also brought toast and a selection of cereals and familiar spreads – I tried to keep my diet as basic as possible and stuck to the eggs and fruit and concentrated on getting water on board ready for the day ahead. Breakfast was a relaxing moment during which we swapped stories with Martin and Agnes about our evening’s conversations with our host families, filled our water bottles from the filtered water and chatted with our Build-On colleagues. When we arrived at the worksite, I was stunned to see over 400 men and women already hard at work before 8 o’clock and Courtney first rallied everyone onto the local football pitch to allocate the daily tasks and run some warm up exercises that provoked much hilarity among the community. She invited us to join in demonstrating our traditional warm-ups and the highlight must have been watching hundreds of people simulating Martin’s Nordic skiing movement in sub-Saharan Africa. The children were also delighted to sing a speeded-up version of   ‘heads, shoulders, knees and toes’.

On the resultant buoyant atmosphere our team immediately threw ourselves into any task we could find, Agnes first joined the Azumai (women) pumping water from the well and carrying it in buckets on their heads ready for cement mixing, while Martin busied himself with the finer points of bricklaying and Kamran learned to use a hoe. My favorite job was filling the wilibala (wheelbarrow) with sand and delivering it to the concrete mixing pit and then using a hoe to produce the right mixture of sand, stones, cement powder and water. What struck me was the complete absence of any machine or mechanical device and yet marvel at the coordination, knowledge and communication. So many people working so hard with no arguments or misunderstandings or needing to wait for things – everyone seemed to know exactly where they should be and what they should be doing, and I noted I had never witnessed such harmony and efficiency on a Western building site. All the time while working, we were engaging with small groups interested to exchange questions about each other’s community habits such as farming, building, relationships between men and women, funeral diplomacy and teenage courting.

Work was organised by gender roles which were gently challenged by the Build-On team. Whenever a woman did a ‘man’s job’ such as bricklaying, passersby would chant encouragement with A-ma-i, A-ma-i and if a man took to carrying a bucket of water on his head, others would chant A-bam-bo, A-bam-bo. Work was hard and people from Malawi appear not to need to drink water even when toiling for hours under the sun. When challenged on this point, men told us it was unusual to drink water unless they were eating a meal. From time to time, men would down tools and rest while women would sing in unison and dance in groups which provided a wonderful and unique atmosphere. 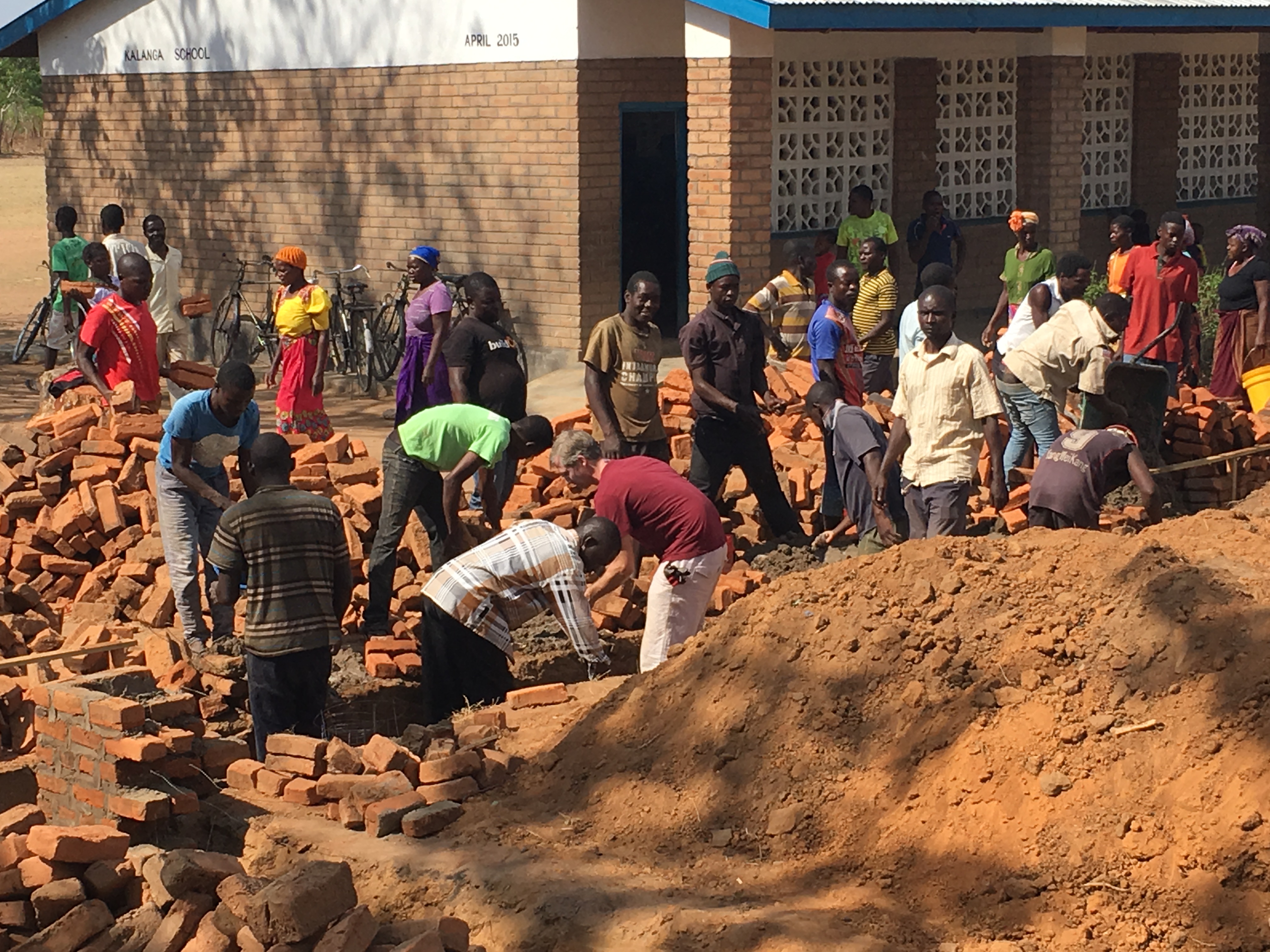 Children were around but not involved in the work because they were encouraged to be studying and they do already have a block. However, it was built 40 years ago on dodgy foundations and has started to sink creating in the words of the headmaster, a “deathtrap”. At midday, our group knocked off and went back to headquarters for lunch, a community engagement session and some of us dropped off for a few minutes. Then we went to the recreational ground and Martin produced a frisbee and launched it with an expert flick of the wrist. The nearby children watched as I ran to catch and return it and within minutes around 100 children were playing a mass game of ultimate frisbee, in which the girls excelled owing to its similarities to netball apparently. In parallel, Kamran introduced the younger children to crazyball which bounces very high but in an unpredictable direction. Add to that a football and several hundred children joined the afternoon fun until we had to call time as the light began to fade. 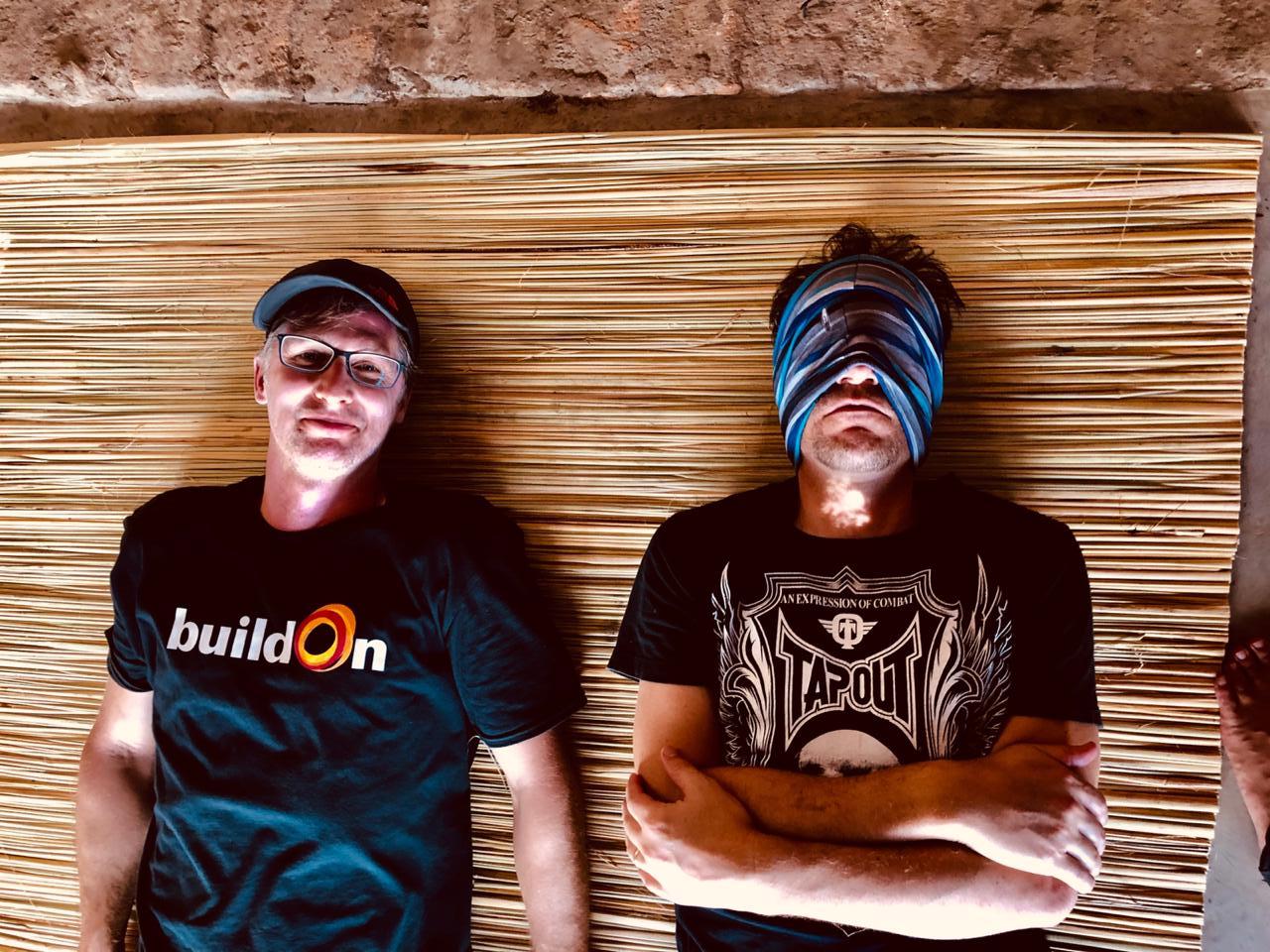 Sadly, after 4 days it was time for us to depart and leave the remainder of the construction to the locals. The closing ceremony was emotional and when faced with part of a school choir singing ‘We will never forget you’ some of us had to hide a tear. In the closing speech, I explained how much we had learned from the community and told them that we had been their students and they became our teachers. I extolled the values of community spirit, teamwork and unabashed happiness that we had been part of for those days and lamented having lost some of those values in the ‘developed’ world. I noticed some families had small solar panels that they place outside in the mornings that power dim lights after dark and enable battery operated local television music videos. A few had early mobile telephones and a telecommunications company seemed to have invested heavily in advertising. It is only a matter of time until Wi-Fi and other technological advancement arrives at Kalanga village and my only hope is that the community manages to hold on to those values I have been so lucky to witness first hand. One thing is for sure – as long as I live, I will never forget you either.