Academic Ranking of World Universities (ARWU) 2022 – Shanghai Ranking Is Out!

Academic Ranking of World Universities (ARWU) 2022 – Shanghai Ranking Is Out!

Shanghai Ranking has released its 2022 edition of the Academic Ranking of World Universities (ARWU). Initially launched in 2003 with just 500 universities on its charts, the annual list is one of the most prestigious sources for university rankings today, with 1,000 universities from 64 territories and regions. The United States and China have dominated the list once again this year, with 196 and 186 featured institutions, respectively. 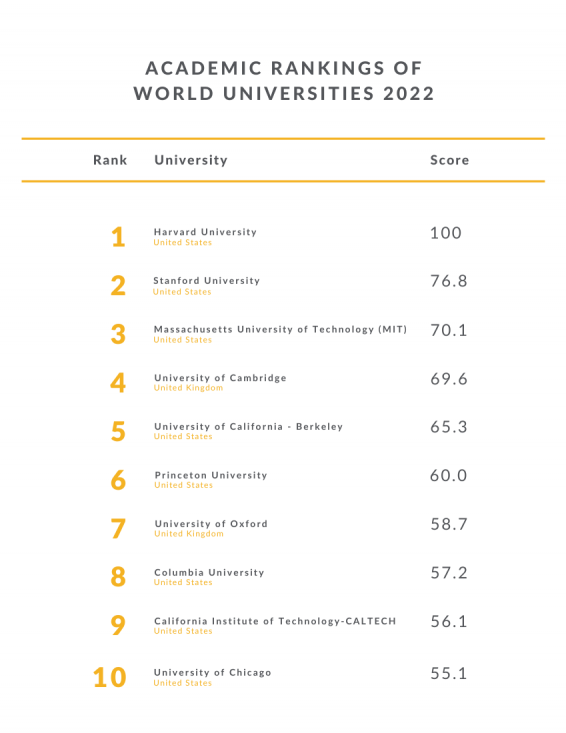 The 2022 roster saw eight universities from the US secure spots within the top ten. Once more, Harvard University has ranked first with a total score of 100, while Stanford University remains in the second position with an overall score of 76.8. Meanwhile, the Massachusetts Institute of Technology (MIT) has moved up from fourth to the third spot with a score of 70.1, swapping places with the University of Cambridge, which fell back to the fourth position with 69.6 points.

The Most Represented Countries

More than 20 institutions from Canada and Brazil were featured on the list, while nine other countries had ten or more universities ranked. These were Austria, China-Taiwan, India, Iran, the Netherlands, Poland, Russia, Sweden, and Turkey. Unlike last year, Switzerland had nine institutions instead of ten featured on this year’s list. Moreover, out of the total 64 countries included in this year’s ranking, 43 had fewer than ten universities on the list. Finally, Jordan and the United Arab Emirates entered this year’s ranking, with the University of Jordan and Khalifa University making it to the [701-800] and [801-900] bracket on the list; however, Tunisia dropped out.

Overview of the MENA Region

Universities in the MENA region are recording a marked improvement this year. The number of regional institutions featured in the top 1,000 list has increased from 41 in 2021 to 48 in 2022. Similarly, while 13 colleges bagged the top 500 spots last year, 15 were featured this year. The number of MENA countries represented also rose from eight to ten in the recent ranking, with a Jordanian institution earning a spot for the first time in ARWU’s 19-year history.

Meanwhile, Saudi Arabia continues to gain ground as one of the fastest risers in the MENA region. This year, seven universities from the Kingdom made the list, an increase from six in 2021. Two institutions — King Abdulaziz University and King Saud University — were featured in the top 150.

The ranking also revealed remarkable progress by several Egyptian universities. Of the seven institutions featured, four advanced by 100 places from last year, including Cairo University, Alexandria University, Mansoura University, and Al Azhar University. Kafrelsheikh University was featured on the list for the first time this year.

Below is a list of the number of MENA institutions included in the ranking as well as the ones that secured the top 500 spots: 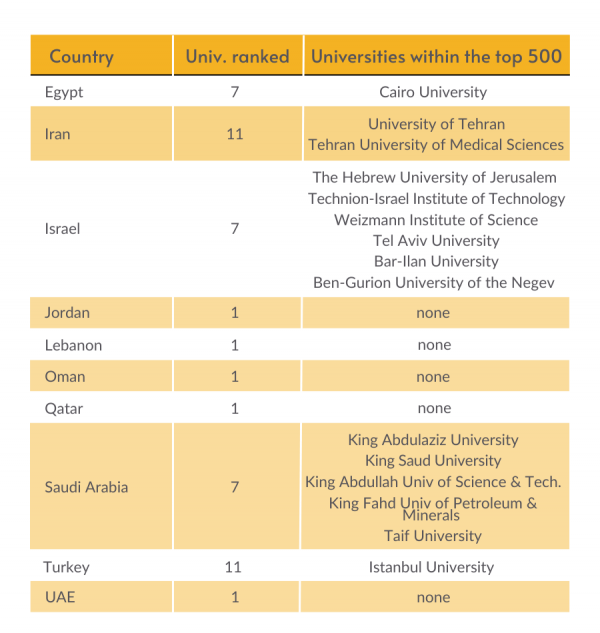 Every institution with “Nobel Laureates, Fields Medalists, Highly Cited Researchers, or papers published in Nature and Science” as well as “universities with a significant amount of papers indexed by Science Citation Index-Expanded (SCIE) and Social Science Citation Index (SSCI)” are considered for ranking, according to ARWU. Out of more than 2,500 universities that are ranked, only the best 1,000 are featured on the list.

The institution with the highest score is assigned a rating of 100 for each indicator, and the rest of the scores are computed according to that. In addition, the indicators and weightage for ARWU are as follows: