The tribal elders of the remote Senegalese village of Louba have a vision, that the next doctor, president or pharmacist will come from their community. They know that means their children need to be better educated and there is enthusiasm from all the local families, parents groups, women’s association and the children themselves, they even have a trained teacher willing to come out and teach. There’s just one problem: there isn’t a school.

The Knowledge E Foundation has committed to building one school per year in the world’s most underprivileged areas as part of its vision for a more knowledgeable world, and this year decided to help Louba village by providing the funds for constructing the school and by going out in person to meet the community and participate in the construction work. With that mission in mind, Knowledge E’s Kamran and Phil exchanged laptop cases and mobile phones for rucksacks and work gloves and set off for Senegal. This is their record of the trip.

We stayed one night on the picturesque West African Atlantic coast together with our buildon partners, Antonita (trek manager), Marie Joe (translator), Latya and Cham (drivers), Ana and Fatima (cooks) who gave us a crash course in Wolof, the West African lingua franca teaching us essential phrases like Ame genn kër gu rafet ‘You have a beautiful home’, Na nga def ‘How are you?’ and Deuk bi neex na ‘I love this village’. The next morning we travelled several hours inland stopping briefly to pick up 35 ten-litre bottles of water for the week and took in the view as we passed luscious green scenery, then the flat lands with their rich salt lakes, and finally into the rural areas in which Louba sits.

As soon as we arrived in Louba, dozens of children surrounded our minibus and ushered us towards to village meeting point from which we could see the area of grass that had been reserved for the school. Until now, a rickety shelter had served as the area for children to gather and learn. Not ideal, especially in rainy season! The entire village population of about 400 people turned out to provide an opening ceremony that included speeches from the village chief, the imam, and representatives of the elders, women’s association, youth, and the parent-teacher association as well as from buildon and Knowledge E. There followed a demonstration of local traditional dancing accompanied by percussion performed on a variety of improvised instruments and we were encouraged to join in.

We were then assigned to set up our temporary accommodation for the week with a lovely family who owned a farm within the village. The head of household, his wives, their sons and their wives and about a dozen children aged between 1 and about 10 provided a lot of opportunity for interaction – Kamran was an instant hit with the children when he sang to them, taught them to count in English and gave lots of high-fives and by the end of the week they firmly believed him to be an inexhaustible source of moonballs.

We hadn’t realised quite how hot it would be and the nights were especially difficult because at such temperatures sleep did not come easily. Sometimes we opened the door but that attracted inquisitive visitors during the day and some whose eyes glowed in the dark at night. Most evenings after dinner and showering, we lay on the veranda under the starry sky and observed the constellations, shooting stars, passing satellites and the milky way which is all hidden from us back in our light-polluted ‘developed’ world.

Every morning, on our way to the worksite, Phil ran ahead to help whichever women were drawing water from the well for their families. Although our host family had one faucet installed in the yard, the water supply was not always available and the well was still the main water source for the whole village and families drink, bathe and cook using the water they can carry back to their homes. There were also plenty of sheep and cattle going this way and that, people offering us a morning greeting and the country sound of cockerels crowing.

Digging the foundations for the school was easy. The rainy season has its advantages and one of those is that the ground was soft and with the help of the villagers we managed to dig the foundation trenches by 11 o’clock on the first morning. That meant we had the chance to try our hand at all the different tasks involved in the construction including making bricks in a mould, breaking rocks into gravel, twisting steel to make rebar, shovelling and transporting sand, mixing concrete, applying mortar and laying bricks. The heat was unforgiving, and it was a constant challenge to drink water faster than we were losing it. It seemed no amount of water, electrolytes or vitamins could prevent dehydration from setting in.

“…budding players of all ages“

Mid-way through each morning, we brought the whole worksite to a halt and formed a village circle of everyone present. We gave rousing motivational speeches, work safety tips and some hilarious warm up routines. In the late afternoons, we brought out footballs and a volleyball which quickly attracted dozens if not hundreds of budding players of all ages. Kamran organised several football teams some of which turned out to be quite good, while Phil managed to get a game of volleyball going between two teams of girls using branches to define the court boundaries. The children loved the games and we witnessed first-hand their team spirit, camaraderie, competitiveness and ambition.

On the last night, we were made acutely aware of why it was called ‘rainy season’ in an eerie parallel with last year’s Malawi visit. Just like last year, we stayed on the village field on the last afternoon playing ball with the entire village and just like last year we were within sight of home when the first drops of rain fell. Within seconds, the heavens opened and drenched the landscape with the most violent thunderstorm either of us has ever witnessed. For the next 6 hours, lightning flashed, thunder rocked our world and torrential rain poured into our yard, onto our roof and blew in through the slats in our door. We couldn’t make our way to the shower area but found a natural shower channelling off the roof right outside which brought gallons of welcome cool storm water. 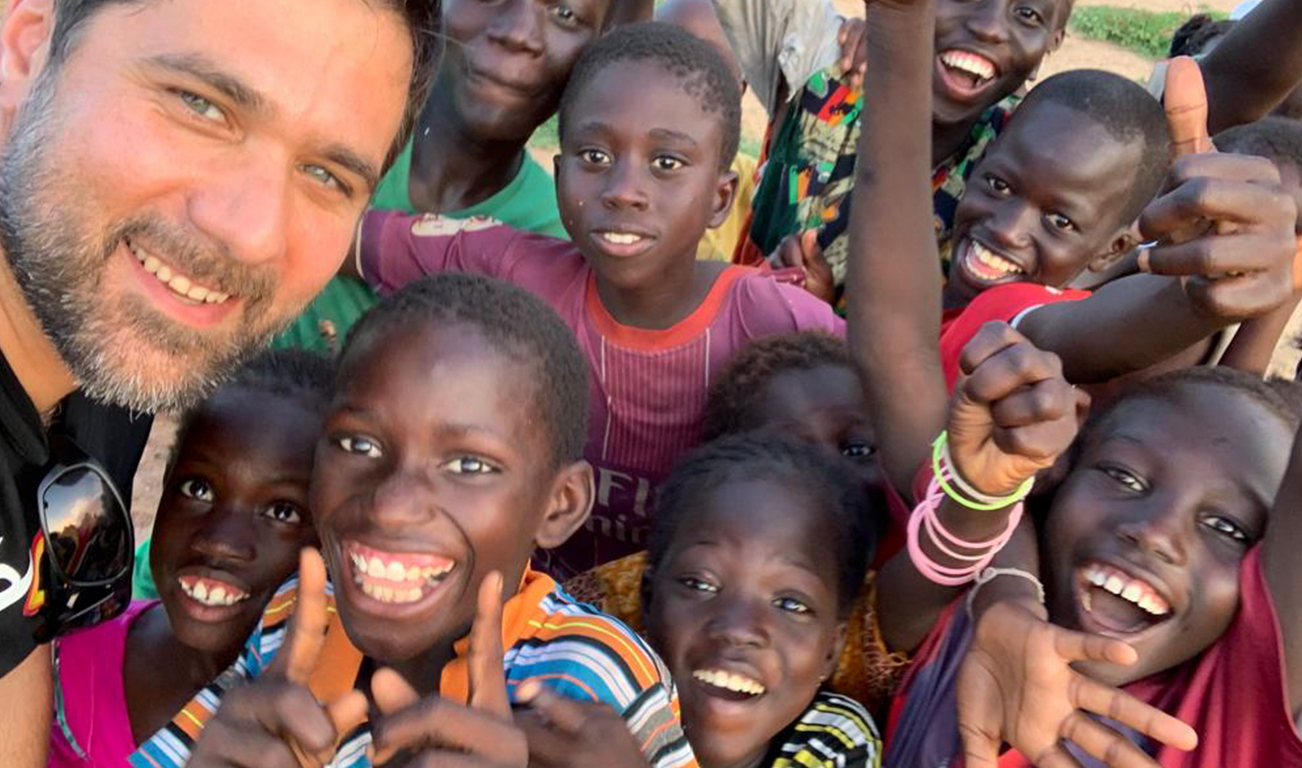 The closing ceremony was on the last morning and involved lots of dancing and speeches of gratitude from all parties. The villagers were delighted to see their school fast becoming a reality and Kamran rightly observed to the elders that he saw potential in every single child we interacted with and that with the village will always be in our hearts. We don’t yet know when Louba will produce its first doctor, president or pharmacist but one thing has changed, its children now have an equal chance.

The vision ‘a more knowledgeable world’ is not just a dream. Knowledge E foundation was created with the aim of directly impacting people’s lives with a focus on improving the conditions for research and education. From disaster relief to building schools in remote areas, KnE contributes a proportion of its profits to worthwhile causes where we can make a difference.

In 2017 Knowledge E made a promise to fund at least one school every year until 2020 in collaboration with Dubai Cares a philanthropic organisation supporting world education.

We cannot change the world but we can make a difference by providing a better chance for education in the areas most in need, brick by brick and school by school. Learn more here.