Times Higher Education (THE) has once again published its second Arab University Rankings to date. Compared to last year, which featured 125 universities from 14 territories in the Arab world, and 30 institutions under reporter status [submitted their data, but weren’t eligible for a rank], this year’s charts ranked a total of 169 universities across 15 countries and listed another 48 institutions with reporter status. The increase in Arab universities being ranked reflects not only the increase in the region’s higher education efforts but also the increased regional interest in being ranked.

Saudi Arabian and United Arab Emirates universities topped the charts this year, populating most of the top ten spots. Meanwhile, Egypt remains the most represented country on the list with 34 universities ranked, closely followed by Saudi Arabia with 32 universities. 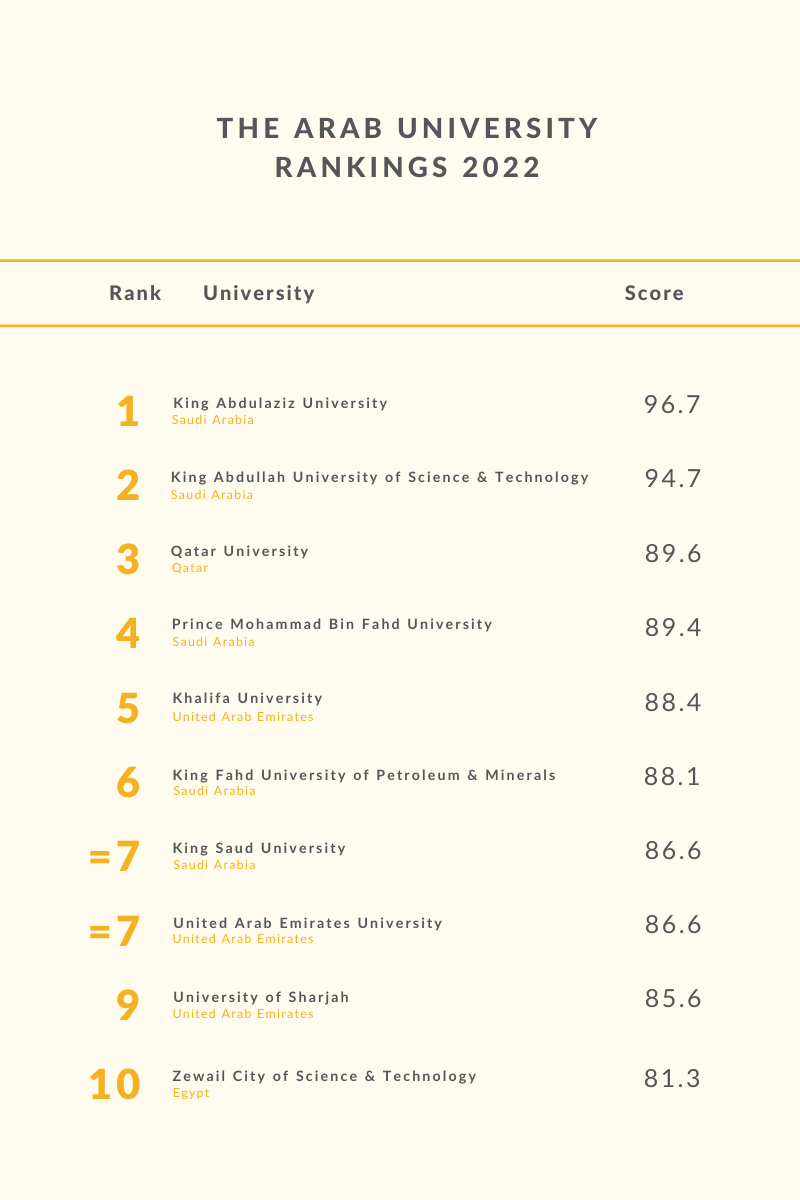 Adapted from: THE Arab University Rankings 2022

For the second consecutive year, King Abdulaziz University takes the throne as THE top Arab university with a total overall score of 96.7. King Abdullah University of Science and Technology rose from third place last year to second place this year, advancing over Qatar University which occupied third place, down from second last year. Prince Mohammad Bin Fahd University maintained its status as fourth best Arab university according to THE ranking, while Khalifa University and King Fahd University of Petroleum and Minerals swapped places with the former rising to fifth place and the latter falling back to sixth. Additionally, with the United Arab Emirates rising a rank this year, it tied in with King Saud University in seventh place. Perhaps the fastest riser on the charts for 2022 is University of Sharjah which rose a whopping ten spots to reach ninth rank, up from 19th last year. Last but not least, the only Egyptian university to make it to the top ten, Zewail City of Science and Technology, has held on to its spot in the tenth rank, with an overall score of 81.3.

Adapted from: THE Arab University Rankings 2022

Iraq and Algeria both also improved their representation on the charts this year with seven more universities making it to the list than last year. Similarly, the number of Jordanian universities that scored a position on the ranking this year almost doubled.

United Arab Emirate universities have recorded a tangible improvement with so many universities rising up the ranks such as the University of Sharjah (from 19th to ninth), Al Ain University (from 27th to 15th), and Abu Dhabi University which made an appearance on THE charts for the first time this year and remarkably made it to the top 50 in THE Arab Rankings in 39th place and within the [301-350] bracket on THE World University Rankings for 2023.

The Future of Higher Education in the Arab World

The pandemic has surely placed a strain on universities and higher education institutions across the globe, but with developments in online learning, it has also offered plenty of opportunities for the future of education. Sabrina Joseph, provost and chief academic officer at the American University in Dubai, authored a truly insightful article about the state of higher education in the region and the routes that could bridge the gaps between the workforce of tomorrow and the skillsets needed for the future. She particularly stressed the importance of engaging with industry which she stated, “cannot happen in isolation”.

“It must emanate from a clearly articulated university mission to foster global awareness, digital literacy, numerical competence, lifelong learning and creative, entrepreneurial mindsets", Joseph continued. " Such an education demands experiential, interdisciplinary, student-centred learning, delivered by faculty who are actively involved in collaborative, applied research and whose professional development is continuously nurtured by their universities.”