Times Higher Education (THE) has published its World University Rankings for 2022. More than 1,600 universities were ranked this year, and around 450 others were listed with reporter status.

Universities carrying out impactful research related to the pandemic are witnessing an increase in citations, which is ultimately improving their rankings. According to THE, 19 universities have significantly improved their citation impact score in the past year after publishing medical papers relating to the virus; 11 of those are from mainland China.

Most of the top ten universities have gone up or down a few ranks this year, with the University of Oxford still occupying first place. The California Institute of Technology has moved up two spots to second place from fourth place last year. Similarly, Harvard University has moved up from the third spot to second place this year. Although it has slightly improved its score from 92.2 to 92.3, Stanford has dropped to fourth place from second. The University of Cambridge moved up a rank, sharing 5th place with Massachusetts Institute of Technology, which has maintained its rank. Princeton has gone up two spots from 9th to 7th while the University of California, Berkeley and Yale have both dropped a spot, from 7th to 8th and 8th to 9th, respectively. Still in 10th spot since last year is The University of Chicago with an overall score of 89.8.

Higher education expert and senior assistant director for strategic analysis at SUNY Binghamton University, Manar Sabry, has explained that Saudi Arabia’s and Egypt’s progress in this regard “follow decades of policy-driven growth in scientific research and an increase in funding”.

A total of 99 countries and territories were featured in this year’s World University Rankings, with six new countries compared to last year: Azerbaijan, Ecuador, Ethiopia, Fiji, Palestine, and Tanzania. In other news, China has been steadily advancing and now has the fifth highest number of institutions within the top 200, surpassing Canada. The top three most represented countries on this year’s list are the United States, the United Kingdom, and Germany with 57, 28, and 22 institutions within the top 200, respectively. 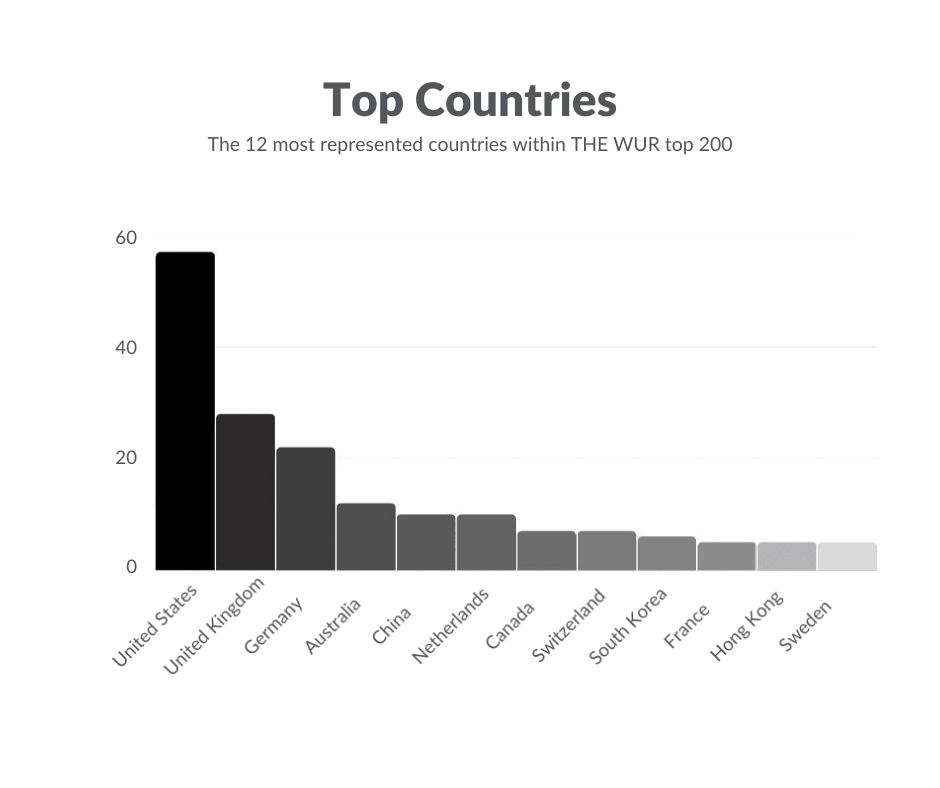 THE World University Rankings are based on performance indicators grouped into five main areas: teaching or the learning environment; research with a focus on volume, income, and reputation; citations and research influence; international outlook including staff, students, and research; and finally, industry income or knowledge transfer.

While the overall rankings result from the average total points earned across all areas, it is still possible to look at the top universities within each area separately. According to the results, Harvard University ranks best in learning environment with 94.5 for teaching. However, the highest research score goes to Oxford with an incredible 99.6, while the University of Cambridge follows closely after with 99.5. Finally, the Macau University of Science and Technology received the highest score for international outlook, with a total of 99.9.

Though London Business School only made it to the list under reporter status, it’s worth mentioning that it has the highest rate of international students at 91%. Finally, the institution with the highest female to male ratio ranked in the list is United Arab Emirates University, with a ratio of 80:20.

• Egypt: 23 universities ranked – Aswan University made it to the top 500

• Israel: Eight universities ranked – three made it into the top 500:

• Jordan: Five universities ranked – Jordan University of Science and Technology made it to the top 500.

• Lebanon: Four universities ranked – The American University of Beirut made it to the top 500

• Morocco: Six universities ranked – none made it to the top 500

• Palestine: One university ranked – An-Najah National University made it to the top 500

• Qatar: One university ranked – Qatar University made it to the top 500

• Tunisia: Six universities ranked – none made it to the top 500

• United Arab Emirates: Five universities ranked – three made it into the top 500: