GEMS World Academy has partnered with Dubai Cares to sponsor a school.

The Run to Overcome Organizing Committee at The GEMS World Academy states that at GEMS World Academy, the mission statement mentions that it aims to develop caring students who have the knowledge, skills and character to take action and create a better, more peaceful world. One way we aim to be that is by helping those in need. In our world, there are more than 124 million children that have never started school or dropped out. Therefore, GEMS has decided to take on a long-term project in collaboration with Dubai Cares. Over the course of 3 years, it is their goal to raise approximately 130,000 AED in order to adopt and fund a school in a third world country.

Dubai Cares, part of Mohammed bin Rashid Al Maktoum Global Initiatives, is proud to announce the Adopt a School initiative. Over the last, this initiative has provided thousands of children in developing countries with access to quality education.

Knowledge E is proud to be a sponsor of such a great initiative! 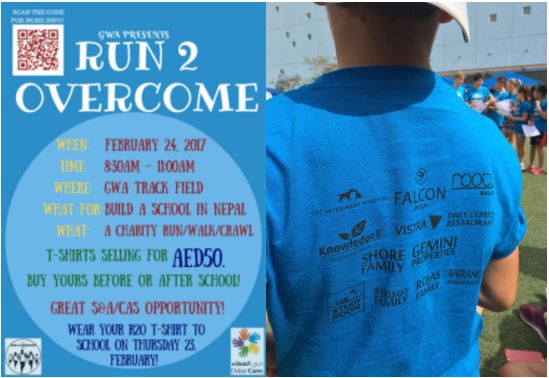