Times Higher Education (THE) released its 2020 World University Rankings table listing the top 1,396 universities from 92 countries. This is the THE’s largest ever release.
University of Oxford maintained its position as the world’s best for the fourth consecutive year and was followed by the California Institute of Technology (Caltech) and University of Cambridge in second and third positions.

US and UK institutions dominated the rankings with only five universities in the top 30 coming from outside those two countries, although the overall performance of institutions from the Anglo-American duo fell back. The top positions are populated by a relatively stable group of institutions each year, while perhaps the more exciting changes are happening in the next tier. Between ranks 31-50, universities from 12 different countries represent four continents.

Asian universities have consistently increased their performance in THE’s ranking. One of the biggest winners has been China, now with 81 universities ranked including the top two Asian performers (Universities of Tsinghua 23rd and Peking 24th) and seven Chinese universities among the world’s top 200, up from just four in the 2017 listing.

Iran has also improved and this year sees seven universities in the world’s top 600, up from three last year. In the Middle East, both Iran and Turkey added 11 universities to the ranking, raising Iran’s total to 40 universities and Turkey’s to 34. The other new entries this year are Egypt’s Aswan University, Iraq’s University of Technology, the Al-Balqa Applied University in Jordan, Lebanon’s Université Saint-Joseph de Beyrouth, and King Khalid University of Saudi Arabia. This grows the Middle Eastern countries’ contribution to a whopping 124 institutions!

The London based ranking company’s data analysts crunched hundreds of thousands of data points in order to produce what THE says is the ‘only independently audited global university ranking’.

THE uses 13 indicators to calculate its world ranking in areas covering teaching, research, citation impact, international outlook, and industry engagement. Below is a birds-eye summary of how these items are weighted. 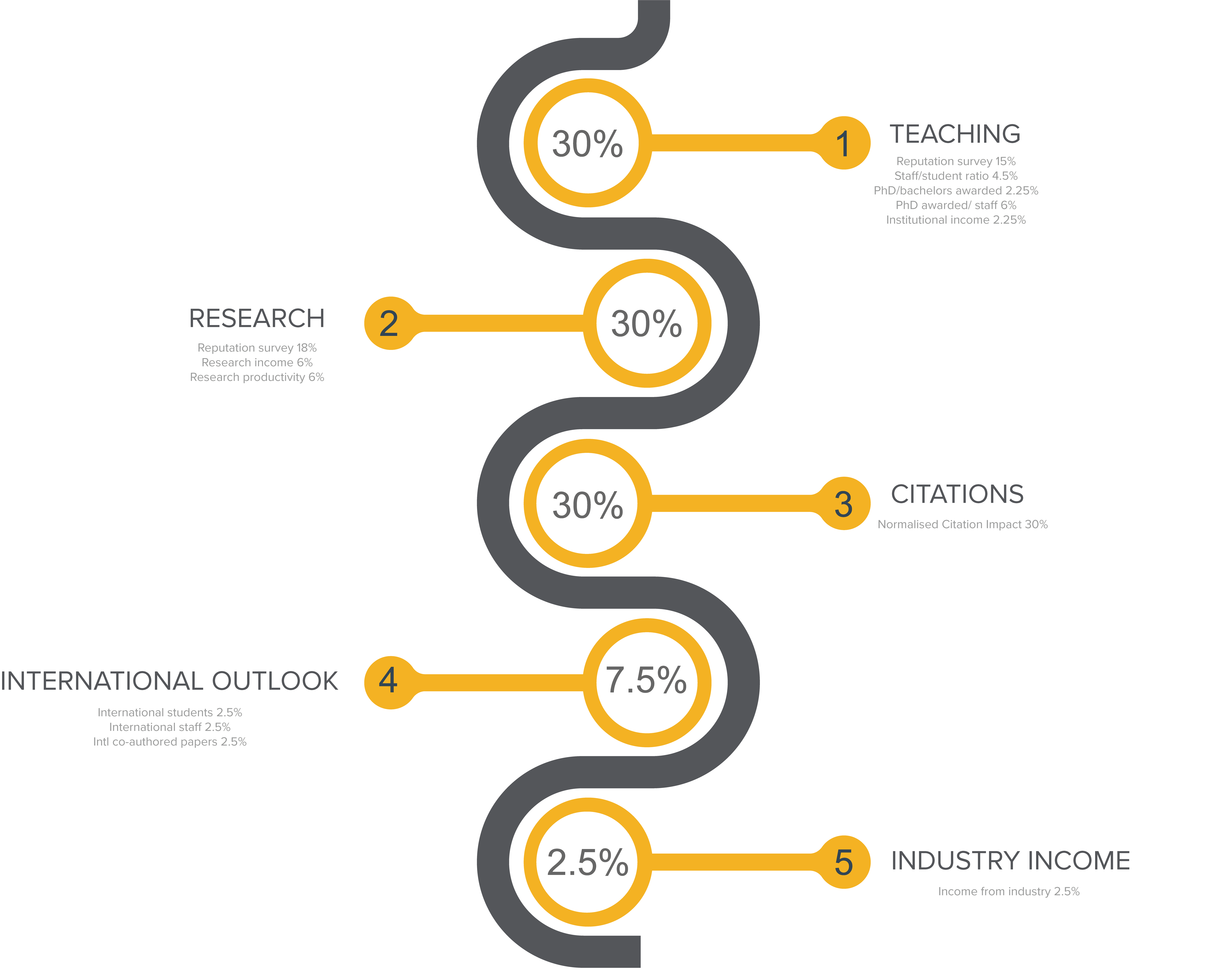 There are now around 20 different global university rankings providers. This presents a challenge to keep up with all their new releases and of course, poses the big question! Which listing to follow? To complicate matters further, many of these ranking systems now publish region-specific, subject-specific and even age-specific rankings as well as their global listing. These are additionally released at different intervals throughout the year. As the competition for attention to the rankings increases and discussions about their methodologies intensify, some have suggested the next development should be a ranking of the rankings to answer these questions!